The following is an essay written by an SSRC Social Data Dissertation Fellow, based on her project. The program was generously funded by the Omidiyar Network.

What does it mean to be a skeptical social media user?

On the other hand, there is a second type of skepticism that I call “identity-motivated” skepticism. Identity-motivated skepticism is driven by a concern about how social media misinformation is related to competing ideologies and political (dis)advantages. Given that the public discourse about social media misinformation is tightly associated with the discourse about political campaigns and elections, people may not trust what others share on social media, worrying that others share false stories that favor their own group. Such skepticism may be driven by the belief that on social media, there are too many lies by partisan elites or stories fabricated to make their candidate or side look bad. Some may even feel that information on social media often does not represent “their own truth.”

Partisanship, on the other hand, does not strongly influence the extent of accuracy-motivated skepticism people hold, although Independents were more likely to score in the middle than Republicans and Democrats. 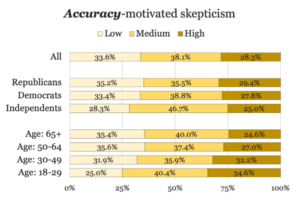 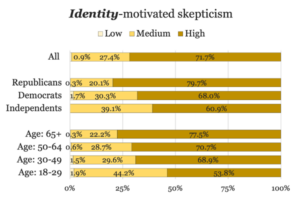 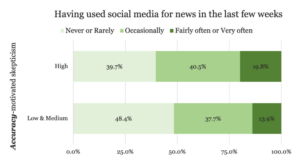 In contrast, 13.2% of those with high identity-motivated skepticism reported using social media for news fairly often or very often in the last few weeks, while 21.6% of those with low or medium identity-motivated skepticism have used social media for news fairly often or very often. This suggests that skepticism towards misinformation may lead people to adjust their behaviors on social media, and exactly how they shift their behaviors is dependent on their motivations. A skeptical user who is motivated by accuracy will seek more news to cross-check their information, which may lead to virtuous cycles of knowledge gain. However, when a user is skeptical about social media misinformation mainly for identity reasons, their skepticism might lead them to avoid getting news from social media, potentially resulting in less political learning and more closemindedness. 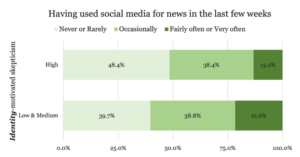 Further, the types of skepticism may also shape how people interpret bias in the social media misinformation they encounter. On average, Republicans saw misinformation on social media as mostly favoring Democrats, while Democrats saw it as mostly favoring Republicans. However, having a high level of accuracy-motivated skepticism attenuated this tendency to point fingers, moving both sides towards the middle ground. This effect was more salient for Democrats: having a high level of accuracy-motivated skepticism helped Democrats more than it helped Republicans in decreasing the tendency to see the misinformation as favoring the other side.

Particularly for Republicans, a high level of identity-motivated skepticism increased the extent to which respondents’ thought social media misinformation influenced the result of the 2020 US presidential election. Republicans were more likely than Democrats to say that social misinformation influenced the 2020 election on average. Moreover, Republicans with a high level of identity-motivated skepticism were particularly likely to say so. In contrast, Democrats showed ambivalence to this question by and large. 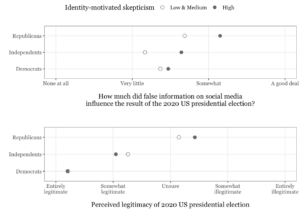 Understanding these different types of skepticism is important for how media practitioners and educators can better design implement digital literacy interventions that combat misinformation. Simply advocating for “being skeptical” is usually not enough since various forms of skepticism can cast contrasting effects on individuals’ use of social media and understanding of politics. Instead, it is crucial to design targeted intervention and education focused on accuracy-based norms, values, and skills, and avoid perpetuating identity biases in understanding truth and falsehoods.

How I conducted the research

I constructed and validated the scales to measure social media skepticism by conducting two pilot surveys using Amazon Mechanical Turk (987 respondents in total). Funded by the SSRC Social Data Dissertation Fellowship, I collected a two-wave panel survey through Qualtrics before and after the 2020 U.S. presidential election. I used quota sampling so that the features of gender, age, race, education, and income of the sample broadly matched the US census data. 1709 Respondents completed the first survey in the two weeks leading to the election day and were recontacted for a second survey two weeks after the election day; 826 respondents completed both waves. I analyzed the results using the data reported by the 826 respondents who completed both waves. In particular, I used respondents’ answers to social media skepticism and demographics in the first wave and their answers to social media news use, perception of misinformation on social media, and election legitimacy in the second wave to explore how different groups of people hold types of skepticism, and how types of skepticism shape people’s beliefs, attitudes, and behaviors.

Dis- and misinformation are not created and spread in a vacuum. While concerns over information quality have rocketed to prominence in recent years, those concerns have been fueled by political, social, and technological changes decades in the making. We address some of the contexts of misinformation, beginning with political polarization, and the twin concepts of echo chambers and filter bubbles.

Russia’s interference in the 2016 US election is just the tip of the iceberg. Fair elections with credible, honored results are a cornerstone of democratic ideals. Around the world, those elections are under threat from rival states and international networks of ideologically motivated radicals. We focus on cross-border, coordinated disinformation campaigns aimed at influencing voters or casting doubt on the electoral process.

This research review addresses the concept of election interference, specifically online or digital election interference. The phenomenon has gained a great deal of popular and scholarly attention since 2014, particularly following the election of Donald Trump and accusations of foreign meddling in European elections.

Terms such as “fake news,” misinformation, disinformation, propaganda, polarization, and networked harassment have rocketed to prominence in recent years. This literature review addresses some of the contexts of misinformation, beginning with political polarization and the twin concepts of ideological echo chambers and filter bubbles.