By Aaron Smith and Kenneth Olmstead

Americans tend to view the impact of the internet and other digital technologies on their own lives in largely positive ways, Pew Research Center surveys have shown over the years. A survey of U.S. adults conducted in January 2018 finds continuing evidence of this trend, with the vast majority of internet users (88%) saying the internet has, on balance, been a mostly good thing for them personally. 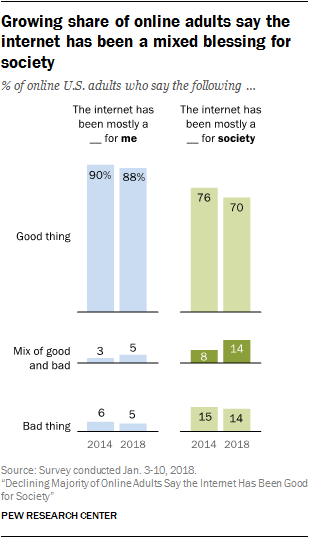 But even as they view the internet’s personal impact in a positive light, Americans have grown somewhat more ambivalent about the impact of digital connectivity on society as a whole. A sizable majority of online adults (70%) continue to believe the internet has been a good thing for society. Yet the share of online adults saying this has declined by a modest but still significant 6 percentage points since early 2014, when the Center first asked the question. This is balanced by a corresponding increase (from 8% to 14%) in the share of online adults who say the internet’s societal impact is a mix of good and bad. Meanwhile, the share saying the internet has been a mostly bad thing for society is largely unchanged over that time: 15% said this in 2014, and 14% say so today.

Source: Declining Majority of Online Adults Say the Internet Has Been Good for Society