This morning, SSRC President Alondra Nelson made a statement announcing a new research collaboration with Facebook, the Social Data Initiative:

Recent revelations about the abuse of Facebook data and spread of disinformation make clear that social media can have negative ramifications for society. Today the SSRC begins an extraordinary Social Data Initiative at the frontiers of digital culture to examine the problem, explore questions about the responsible use of social network data, and generate insights to inform solutions.

With the potential to usher in a new paradigm for research collaboration between industry and the academy, Facebook will make data available for the first time to social science researchers via an independent, transparent, peer-review process.

The SSRC’s role will include helping to form a steering committee of independent scholars to develop a research agenda about social media’s impact on society, beginning with elections, and stewardship of both the independent application and selection processes, as well as the peer-review process. Any proposal submitted through this process must first have been reviewed by a University Institutional Review Board (IRB), federally approved IRB, or international equivalent.

The Initiative is aligned with SSRC’s Task Force to Secure Knowledge, and is based on and illustrated in Nathaniel Persily and Gary King’s working paper, “A Model for Industry-Academic Partnerships”:

We propose here a new model for industry-academic partnerships […] via a novel organizational structure: Respected scholars form a commission which, as a trusted third party, receives access to all relevant firm information and systems, and then recruits independent academics to do research in specific areas following standard peer review protocols organized and funded by nonprofit foundations. We also report on a partnership we helped forge under this model to make data available about the extremely visible and highly politicized issues surrounding the impact of social media on elections and democracy.

Henry Farrell, Margaret Levi, and Tim O’Reilly, all involved in advisory capacities in SSRC programs, published an article on Vox, “Mark Zuckerberg runs a nation-state, and he’s the king”, on Mark Zuckerberg’s unique position and responsibilities:

One of the key problems of political economy, therefore, is “tying the king’s hands” — allowing the sovereign enough power to do his job, but constraining him so that he does not abuse his trust. Facebook’s version of this problem is doubly hard, in that the company faces mixed incentives.

On the one hand, it has to reassure its users, but on the other it has to answer to the advertisers who drive its business model and allow it to make profits — and to the stock-market investors who create such extraordinary wealth for its owners and employees by speculating on the future growth of those profits.

Zuckerberg announced today in an exclusive article in the Atlantic that he will not resign, and is instead seeking the help of outside experts to evaluate his actions and those of the company. The Social Data Initiative is a part of that scrutiny. In a comprehensive Twitter thread, the MIT Center for Civic Media’s J. Nathan Matias explains the partnership: 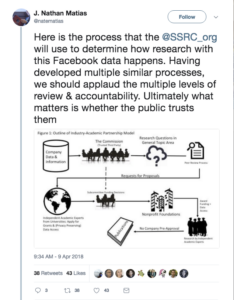 This post will be updated with further links as news on this Initiative develops.